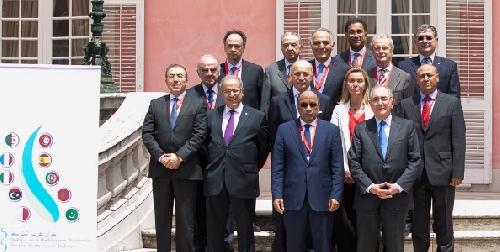 “Strengthening economic cooperation in the Western Mediterranean”, an event in Barcelona

The first Economic Forum “Strengthening economic cooperation in the Western Mediterranean”
(Dialogue 5+5) takes place in Barcelona on the 23rd of October 2013.
Portugal and Mauritania, as co-presidencies of the 5+5 Dialogue, Spain as host country, the Secretariat of the Union for the Mediterranean, the European Institute of the Mediterranean (IEMed) and Casa Mediterráneo co-organised the event.

More than 300 people took part to it, including Ministers of Foreign Affairs and Presidents of employers’ associations of Algeria, France, Italy, Libya, Malta, Mauritania, Morocco, Portugal, Spain and Tunisia, as well as 200 business leaders from the region gathered at the Union for the Mediterranean Secretariat.

The event aimed at strengthening the economic cooperation between Western European countries and the Maghreb region, gathering business leaders and high-level representatives from major enterprises and employers’ associations from the Western Mediterranean.
There were covered the following topics:
– the role of the Western Mediterranean in a global economy;
– the economic cooperation between Europe, Maghreb and Sub-Saharan Africa;
– public services and sustainable urban development;
– small and Medium Enterprises (SMEs) as vectors of business development and economic growth;
– project funding for development;
– and Mediterranean arbitration.

Regional cooperation projects, identified within the framework of the 5+5 Dialogue, are being implemented through the operational capacities of the Secretariat of the Union for the Mediterranean (UfM).

The 5+5 Dialogue comprises the following countries: Algeria, France, Italy, Libya, Malta, Mauritania, Morocco, Portugal, Spain and Tunisia. It was launched in Rome in 1990 as an informal sub-regional forum which main aim was to foster relations and cooperation between European countries and the newly born Arab Maghreb Union.
In the framework of 5+5 Dialogue, further conferences have taken place involving issues such as Migration, Defence, Transport, Tourism, Education, or Environmental Issues and Renewable Energy.

“The Threshold of the Desert”, a documentary on the life of a Moroccan woman
A story of Palestine at the Mediterranean Film Festival in Brussels