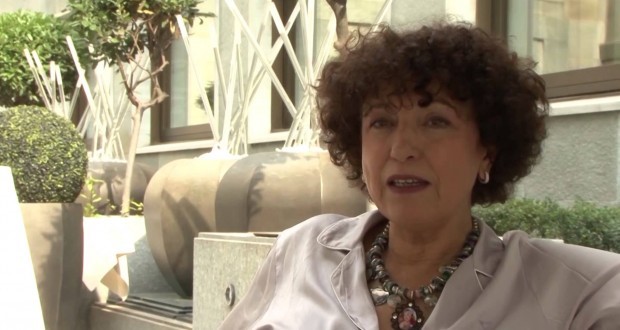 Rita (Ghita) El Khayat will partecipate at the debate organised by Mediter Network, at 8 th of May in Brussels, entitled “Les femmes de la mediterranée entre le printemps arabe et les crises”. Before the debate, she has been interviewed by Tiziana Sforza, journalist of Mediter network.

What role did women play during the “arab spring”?
Women were in streets like men: both the antagonist wings were present in those strikes and revolutions; we have to say that the number of women was not as important as this of men. They were more or less behind the violence and the determination of men. Veiled women were more important in number that unveiled ones; from the beginning of the Arab Spring, it was clear that Islamists opinions were led by men and that women were led by men. Now, it’s an evidence: women are prayed to support and go on their old roles in society…

Not in all the countries on the North side of Mediterranean sea women enjoy the same rights as men. What are the main tools to support the female empowerment and to build a female leadership?
Yes, I agree: the most important thing is to have a strong law imposing equality between men and women regarding salaries all over the world. It’s evident that in this field women are bad treated: doing the same jobs, having the same training, they are less paid… and this is the same all over Europe, and of course more visible in the other (traditional) societies. In Morocco, for example, women were/are employed in a huge number in factories because not involved in strikes, not included in trades unions, paid half or less in front of male comrades… it’s more or less the same until now! In the political campaign of May 2012 for the election of the French President, this point was at the top actions of the leftist candidate, I mean inequalities between men and women in one of the most advanced country in the world… we are in the same landscape considering work field! (I’m involved as specialized Physician in Medicine Work and Ergonomics)

Which actions have been carried on by European countries and countries of the North side of Mediterranean sea to spread the awareness about the relevant role played by women for social and economical growth?
Action was first done during the period of feminists writings and strong propositions like social trial asking for the right of abortion in France and the law -voted in France in 1974 giving this right to free women and girls after a historical vote led by Simone Veil-; the rights increased after all the period of active fights. Giving rights to women in the north of Mediterranean empowered women as active citizens and persons involved in social and economical growth and successes…
A weak, despised and illiterate woman is unable to give something around her, uprising in the best way her children or guiding her family in a total cleverness, she’s a dead weight in social group and nation. It’s something understandable and mathematical. Free and respected women are the true partners of growth, not those latched in houses, illiterate or like, pushing all the society down and down.
Rita (Ghita) El Khayat’s biography
-Psychiatrist and psychoanalyst (graduated in Paris)
-Graduated of Occupational Medicine and Ergonomics (graduated in Bordeaux)
-Graduated from medical aerospace (graduated in Paris)
– Ph.D. in Anthropology of the Arab world (School of High Studies in Social Sciences, EHESS/Paris)
-Professor at University of Milano and conceiver of the chair of “Anthropology of knowledge and cognition”
-Member of the Department of Women’s Studies (UQAM University
of Quebec Canada)
-Writer: thirty-six books published to date (Mars 2012)

Rita (Ghita) El Khayat lived for ten years in France and Europe.
Medical Doctor, she became psychiatrist and holds two other specialties in medicine. She returned to live in Morocco where she was born, to do what she has always loved (Latin, literature, philosophy, drawing and painting) and writing as well.
She also is a journalist and author of numerous articles and books on the Status
of Women in the Arab-Islamic world. She has taught, and travelled all around
the world, gave lectures in many countries: and is dedicated today to the practice of psychiatry and psychoanalysis, to the art criticism, fiction and poetry, she is also lecturer at the University of Chieti, Italy, where she teaches Anthropology of Knowledge (Department of Philosophy). She was admitted to the International PEN after the vote of December 2003 in Mexico City. She is a Knight of the Order of the Throne in Morocco (1995). She is honorary Citizen of the City of Pescara (October 2006). She is Ambassador of the “Mediterranean Games” of 2009
(Pescara, Italy). She is laureate of the “Prize for Peace 2007” she received at Maiori, Italy (October 2007). She is a member of the Council of Directors of the International Festival Film of Marrakech. She was appointed on December 2006 as a Member of the Ethics Committee of 2M, the Moroccan Radio Channel & TV.
She is a member of the African network FEMNET(African Women’s Development and Communication Network) since 2007. She hosts a daily literary program,
called “A Book, a Friend” on the Moroccan national radio since June 2008. She has published 36 books to date, wrote in twenty collective books, has authored over one hundred fifty scientific articles (about Medicine, Psychiatry,
psychoanalysis, anthropology, art, reflection, etc.).